Smarter Sorting’s CEO Chris Ripley is on a personal mission to develop many sustainable options to maximize the salvation of unsold or unsalable products by taking apart and understanding every component that goes into those products, whether they’re discarded electronic devices, circuit boards, or partially used containers of building materials or cleaning products. His company’s cutting-edge technology and its proprietary materials database allow people of all skill levels working for retailers, non-profit organizations, and municipalities to make quick, cost-effective, regulation-compliant decisions for handling all types of unsold, unused, and discarded products based on the physical properties of the products’ constituent materials.

Smarter Sorting’s end goal is to take every bit of this material out of civilization’s waste streams, landfills, and incinerators. To do that, Smarter Sorting’s rugged, intelligent SIS workstations use high-resolution cameras, scales, and barcode scanners and a smart chemical database to help workers identify an object or a quantity of material and then determine whether it can be resold through different sales channels, recycled, or donated. Failing any of these options, Smarter Sorting wants to ensure that these materials are at least properly disposed of.

For example, says Ripley, consider a returned bottle of wine that’s been opened and partially consumed, which is a surprisingly frequent occurrence at grocery stores. The leftover wine obviously can’t be resold. Several overlapping and potentially confusing municipal regulations determine how the wine can be discarded, based on the volume of wine remaining and its alcohol content. If only a small quantity of wine remains and if the wine’s alcohol content is low, many regulations permit the wine to be poured down the drain. Otherwise, the regulations require different disposal methods.

Geographic location and municipal rules determine exactly how much liquid can be disposed of in this manner. A Smarter Sorting SIS workstation located in the grocery store’s backroom can use the barcode on the wine bottle’s label to identify the product. High-resolution cameras image the bottle and judge how much wine remains. With that information, Smarter Sorting’s Point of Reversal (POR) system can advise a worker on the best way to handle the components of the returned item.

To achieve its overall goals, Austin-based Smarter Sorting developed an early prototype of an interactive workstation that workers can use to evaluate and properly sort nearly any type of material. Smarter Sorting chose to build its prototype system using NI LabVIEW because it supports rapid system prototyping with an extremely comprehensive set of device drivers. In addition, LabVIEW enables the speedy development of customized graphical user interface (GUI) screens, which Smarter Sorting would need to create the POR system’s SIS workstations.

After developing an early prototype, Smarter Sorting sought an experienced LabVIEW consulting company who could transform the prototype system into a robust commercial product. Ripley found JKI through a Web search of companies taking prototypes to market in LabVIEW. The two companies have now had a 2-year working relationship and Smarter Sorting’s customers are actively using these POR systems.

“JKI is singular in its ability to design, prototype, and develop systems so quickly,” says Ripley. “They are a critical partner for startups.”

JKI took Smarter Sorting’s prototype system and developed a fully-realized, commercial product that included all of the necessary peripheral interfaces and drivers. The system is based on wireless communications protocols that operate over Ethernet, over Wi-Fi, or even over a cellular connection. A “glossy,” professional screen guides the SIS workstation operator.

Smarter Sorting’s SIS workstations use two high-resolution cameras to image an item’s front and back; a scale weighs the item; and a barcode scanner identifies the item through its UPC (Universal Product Code) label. Then the Smarter Sorting database identifies the chemical(s) in the item and makes disposal recommendations based on this information. The SIS workstation operator then informs the system of the actions taken through a touchscreen and the transaction is recorded in a central database for statistical analysis and auditing. 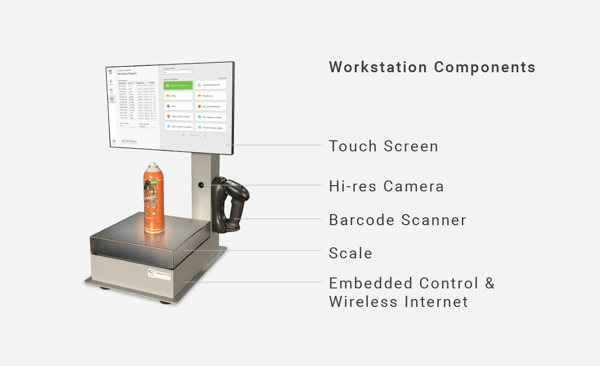 The remote-update capabilities of the JKI Remote System Manager, based on NI SystemLink, allow Smarter Systems to keep its hundreds or thousands of remote SIS workstations running properly and to update the rules used to make recommendations for diverting materials from the waste stream. There are already far too many SIS workstations to perform these updates manually.

Because many of Smarter Sorting’s recommendations are based on municipal regulations, and because these regulations can change, sometimes frequently, SIS workstations must be regularly updated with the latest rules to help guide their decision making. Some mobile SIS workstations are located on trucks and others are located on pushcarts. It would be virtually impossible to manually update all of these remote workstations in a timely manner without an army of field engineers.

Challenge 1: Getting from early prototype to a Minimum Viable Product (MVP) in a short timeframe, for multiple product lines and high-frequency product releases

A minimum viable product (MVP) is a product with the highest-value features to satisfy early customers, and to provide feedback for future product development. When Smarter Sorting approached JKI, the company had a prototype system that fell far short of an MVP. JKI’s first challenge was to work closely with Smarter Sorting to fully understand the business drivers that would define the POR system. During that work, JKI produced realistic mockup screens, industrial designs and 3D models of SIS workstations, which Smarter Sorting used in its pitch deck to court investors. Smarter Sorting also employed these images to get valuable early feedback from customers, even before the first product became operational.

“The screens and workflows JKI developed are our chief sales tool.”

While Smarter Sorting pursued investors and early customers, JKI was creating a software architecture that would meet Smarter Sorting’s initial MVP specifications. As Smarter Sorting talked to more prospects and collected more feedback, the definition for the POR system expanded. That’s how the original concept for a stationary SIS workstation grew to encompass truck-mounted and cart-mounted workstations as well.

JKI tuned the POR system’s software architecture several times to accommodate all of the additional features requested by Smarter Sorting’s prospective customers. In the end, JKI had produced not one but several MVPs for various target customers. JKI successfully tackled all of these challenges while executing to a very aggressive development schedule. New ideas and new features were sometimes added in just a few days after only one conversation between Smarter Sorting and JKI. There were numerous such conversations.

Challenge 2: Developing a software architecture that supports multiple types of wireless, remote SIS workstations with both high-speed and low-speed connections

Workstations designed to operate in an enclosed back room or outside on a loading dock, on a vehicle, or in a pushcart present very different design challenges from the software perspective. Some of Smarter Sorting’s SIS workstations have high-speed Wi-Fi connections and others are restricted to lower-speed cellular connections, yet all must operate correctly and interact in real time. This situation represented a challenging software development problem.

Early on in the project, JKI realized that each new Smarter Sorting customer would request more and more changes, additions, and upgrades to the system design, so JKI’s engineers developed a foundational software platform that would be both scalable—to accommodate the ever-growing number of POR system installations and SIS workstations—and reusable, to streamline the effort needed for ongoing development work on the POR system.

As a result of the strong, positive initial outcome, Smarter Sorting continues to partner with JKI and to further develop the POR system far beyond the original vision. It’s a long-term partnership created from a shared understanding of the business drivers and customer needs, developed early in the project. This deep understanding of customer needs is a hallmark of and significantly differentiates JKI’s unique approach to software consulting.

“JKI extracts good ideas from us and implements them well. I can’t stress enough how unique an experience this was”

Smoothly managing and updating a large, distributed POR system with many SIS workstations was difficult. JKI planned ahead to meet this particular challenge by leveraging its design solution on the JKI Remote System Manager. Although the workstations were geographically dispersed, JKI was able to leverage its expertise in automated software and system management and deployment to setup a distributed system updater for the Smarter Sorting POR project. 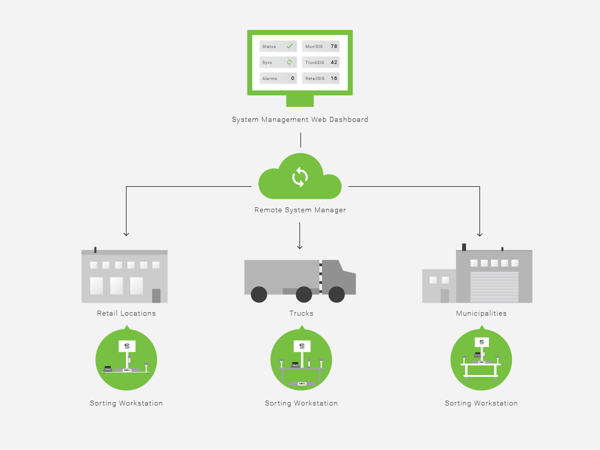 Smarter Sorting has now rolled out working POR systems at recycling centers, municipalities, and multiple large retail chains with multiple locations. The company continues to work closely with JKI to continuously upgrade its system design and to add features.

“With JKI’s help, we’ve done what others have not thought possible.”

JKI’s experienced engineering team has the ability to enter the design process at any point in a product’s lifecycle; from inception, to production release, to continuing engineering and refinement. JKI can help bring a quality product to market in surprisingly little time. JKI’s engineering team uses its knowledge of diverse, cutting-edge technologies and a decidedly creative approach to developing systems and software and taking them to the next level. JKI successfully brought the initial Smarter Systems POR network and SIS workstations online, within the customer’s aggressive development schedule, and continues to work with Smarter Sorting to continuously improve the system and its components.