An explosion of wireless communications and expansion of internet connectivity is creating a new space age. Analysts predict huge growth in spacecraft over the next decade. In the 60 years since the landmark launch of Sputnik, approximately 7,000 satellites have been put into orbit around Earth. In the next five years, plans call for the launch of more than 30,000, according to company filings with the U.S. Federal Communications Commission. Much of that is driven by technology companies like SpaceX and Amazon, which want to put constellations of satellites into low-earth orbit – up to 1,200 miles above the planet - to keep up with demand for ubiquitous communications. Amazon’s Project Kuiper, for example, will launch 3,236 small satellites arrayed at three orbital altitudes.

To meet that growing demand, the satellite industry is undergoing a revolution, moving to higher-volume, more automated and faster manufacturing. Apollo Fusion is playing a key role in that revolution. The startup was co-founded by Mike Cassidy, the former Google vice president that led Google’s high-altitude balloon telecommunications system - Project Loon. Apollo Fusion has designed an electric propulsion system using Hall thrusters. Unlike traditional rockets that burn chemical fuel to produce thrust, Hall thrusters typically operate with inert gases like Krypton or Xenon as a propellant. Energy stored in a battery or generated through solar panels on the spacecraft is sent to the Hall thruster and used to ionize that gas and create a plasma discharge that produces thrust. The system requires much less fuel and is much more energy efficient than chemical rockets because the plasma discharge accelerates the propellant to very high velocities—the expelled gas ions exceed speeds of 10km/s!

One of Apollo Fusion’s chief goals – and one of its major innovations – is for its Hall thrusters to be manufacturable in volumes of hundreds of units per month. Traditionally, satellites have been assembled virtually by hand, one or two at a time. That’s too expensive and time consuming to meet the growing demand.

The other major expense is the rigorous testing satellites require. Every part of a satellite must be tested and qualified to last for years in outer space. This includes radiation exposure, vibration (to simulate launch), and thermal vacuum testing to make sure the parts can survive the extreme temperatures in space. Wear tests—where the thrusters are operated for thousands of hours to simulate on-orbit operation—are performed in a large 2-by-3.5-meter vacuum chamber and can last weeks or even months.

Apollo Fusion wanted to reduce the complexity of testing its thrusters while also ensuring it could consistently collect and retain accurate test data. The company was impressed by JKI’s experience with data acquisition, specifically its intimate familiarity with LabVIEW, and so it hired JKI to help develop the software to run and monitor tests of the thrusters. Dr. Mark Hopkins, vice president of engineering at the company, initially developed the code but needed help to bring it to the next level. His experience was in developing code for experiments, not for production, he says. JKI helped to identify the potential in his rough coding, he notes. “JKI knew how to leverage the features of LabVIEW and their own frameworks to organize the software and make it reproducible and reconfigurable,” he says. “JKI became our software team for the test lab. They were quicker and more effective than we could be at implementing new features.”

“JKI became our software team for the test lab. They were quicker and more effective than we could be at implementing new features.”

The first challenge for JKI was to make the software modular and easy to reconfigure. The most important tool for that was JKI’s RAFL, an object-oriented framework that makes it easy to reconfigure and deploy software. The RAFL-based Apollo Fusion software can now be easily changed for different tests, different test chambers, different product models and different production lines. RAFL also makes it simple to integrate changes into the code as the hardware evolves, an important capability because the company is still developing the hardware. As Apollo Fusion needs new features, JKI gives quick turnaround so the new features can be brought online fast. This kind of nimble, fast response is critical during R&D. Because RAFL is modular, even a large system can be tested very early on. For example, JKI had software that could ignite their thrusters even when only half the software subsystems were deployed.

“RAFL is a good object-oriented framework,” says Hopkins. “It enabled us to write a piece of code and make a driver for a particular widget in the lab, then easily reconfigure the system to add and remove capabilities as we grow and change.”

A second challenge was improving the accuracy and reliability of data acquisition. Testing simulates the many years that satellites spend orbiting the earth. That means running the thrusters for thousands of hours, turning them off and on, and repeatedly running them through all their paces. These tests are not only time-consuming but expensive, so test data must be captured accurately and reliably. The versions of various tests need to be recorded and archived for documentation. If something goes wrong in the 999nth hour of a 1000-hour test, you don’t want to lose all that data. 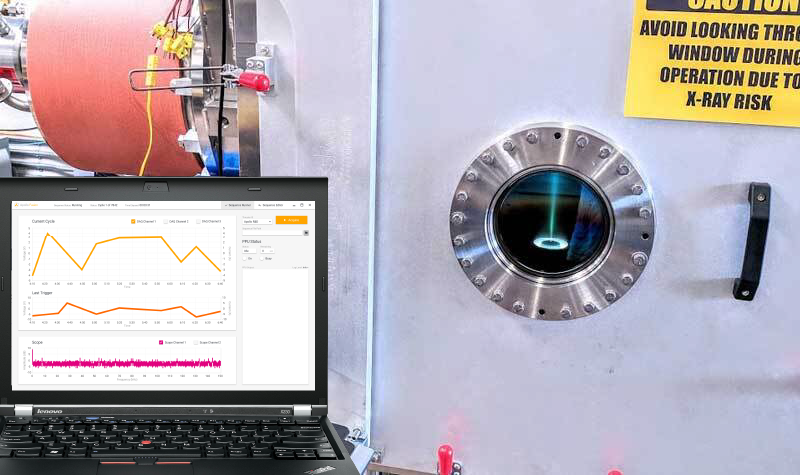 The value of JKI’s expertise was especially important during the COVID-19 pandemic. JKI’s software allowed Apollo Fusion to continue laboratory testing remotely while safely adhering to the shelter-in-place and social distancing orders in place during the crisis. As Hopkins puts it “You guys are life experiment savers!”

The third major challenge was designing a simpler interface to enable technicians to run the tests in mass production. At the beginning, only Hopkins was able to use the software, because he had written it and so understood it. Thanks to JKI’s user interface design and ease of configuration, the new software interface makes it easy for engineers and technicians to use. Because RAFL includes user management, Apollo Fusion can decide which interfaces to make available to technicians and which are available only to engineering staff. And because of the reconfigurability enabled by RAFL, all the software developed for R&D can be reused in the manufacturing setting, which helps the company reduce overhead costs and time when it transitions into mass production.

Next steps and project status

Apollo Fusion is ramping production as its business grows. The company will deploy the software to several external facilities for off-site testing, including final qualification of the thrusters for a customer’s specific mission profile. It will also continue to finalize hardware designs and work with JKI to tweak and integrate software components. RAFL will play a key role here, making those modifications easier because of its configurability.

In the next several years, Apollo Fusion is positioned to play a key role in enabling dozens of new constellations of satellites to ensure communications and internet connectivity.

“We are playing our part in the revolution of the modernization of this field,” says Hopkins. “And JKI is a vital ingredient of that success.”  -Dr. Mark Hopkins